“You can step on those,” says Claudia Wieser, referring to a pair of large reflective plates on the floor. “They’re just steel.” Her studio is clearly also a workshop. Her casual way with the ceramic tiles and metals scattered around the room is a sign that, before studying at the Academy of Fine Arts in Munich, the Bavarian artist (b1973, Freilassing) trained as a blacksmith.
But with her classically modernist aesthetic – like the interiors of the Bauhaus Meisterhäuser in Dessau, but in a more dusty colour pallet – Wieser’s interest lies not just in materials, but in cultural histories as well. Her meticulous drawings of geometric patterns, often with gold leaf applied, have a ritual quality that is reminiscent of the esoteric pioneer of abstraction Hilma af Klint, and, as such, engage the more spiritual elements of modernism, prevalent especially in the Weimar Republic. However, Wieser’s work departs from her early 20th-century counterparts in its acute self-awareness – one that is realised, as she mobilises her objects to become props in a theatre setting.
Mirrors and large-scale collages play games with dimensionality and perspective, making her work as alluring as it is disorienting. Outside the art gallery, for instance at Munich airport or in corporate offices, Wieser’s tasteful assemblages would almost pass for decoration, but, as Jacques said in Shakespeare’s As You Like It: “All the world’s a stage.” And on a stage, nothing is simply decor: this is what the artist wants to remind us.
by KRISTIAN VISTRUP MADSEN
(excerpt from an interview in Studio International published 09/03/2018)
Eingestellt von Monika Jarecka um 11.10.18 Keine Kommentare: 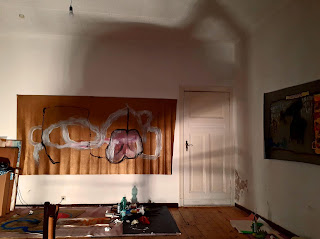 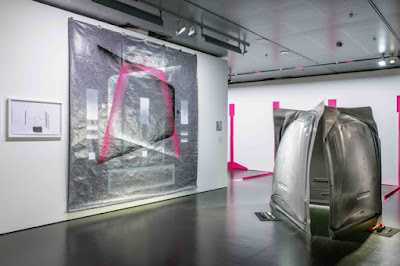